Airbus wants to fly emission-free by 2035, Mercedes-Benz has showcased a fuel-cell truck, the German government has laid the foundation for a global hydrogen economy – today’s plans to make tomorrow’s world greener. And time is running out: Germany is aiming to become the number one when it comes to hydrogen technologies, as Peter Altmaier, the Federal Minister for Economic Affairs and Energy announced this summer. Science and research are working at full speed. The primary component of the energy revolution is so-called “green hydrogen”, which is produced using green electricity. Just a lot of hot air? On the contrary. “The global requirements for energy and transport must be met without producing substances which are detrimental to the climate. Otherwise, it will be impossible to meet the agreed climate targets,” says Professor Matthias Bauer, a chemistry professor at Paderborn University. He is working on a project funded by the Federal Ministry of Education and Research (BMBF) to research how hydrogen can be manufactured by means of sunlight.

Widespread use is required

With the national hydrogen strategy, the German government has defined the framework for the element’s future production, use and reuse. The declared aim is, among other things, gradual conversion to the use of green hydrogen in the fields of transport, industry and heating. In the medium and long term, fuel cell technology in the transport sector, in particular, needs to become more widespread, according to Bauer. “Decarbonisation – that is to say, a clear reduction in carbonic sources of energy – is crucial to achieving a fundamental structural change in public transport, private cars and transport logistics.”

Paderborn wants to play a prominent role in both research and development of this technology in the future. “Our university offers not only expertise in fundamental scientific research, but also application-oriented transport researchers, and experts in software and AI,” says Bauer.

As a fuel source for electric cars, hydrogen is an environmentally friendly alternative to conventional fuels such as petrol or diesel. The scientist explains, “At the moment, my team and I are researching how hydrogen can be produced as efficiently as possible and, above all, in a resource-friendly manner using sunlight. Together with oxygen, hydrogen can be converted to energy relatively simply and directly. The waste product is water, out of which hydrogen can be extracted using catalytic convertors and electricity. It is therefore a closed loop system.”

Currently, the national consumption of hydrogen, according to the German government, is approximately 55 terawatt-hours. However, the majority is “blue hydrogen” and comes from fossil-based raw materials. According to Bauer, “It is imperative that this changes. Only green hydrogen is truly sustainable”.

Germany needs to stay on the ball

The Federal Ministry of Education and Research has recently put forward the idea of a feasibility study for a German-Australian supply chain. This is intended to promote the development of a global green hydrogen economy. Bauer explains, “This will not only lead to new sales markets for German companies. It would also be of great importance for our science sector. Germany can position itself on a global stage as a country producing outstanding, cutting-edge research and as the technological market leader. Alongside the transport sector, green hydrogen is of particular interest to the manufacturing sector, for the production of chemicals or plastics and in connection with power-to-heat, i.e. heating. However, many of these technologies require further research so that they can be improved and developed to meet industry standards.” At the same time, Professor Bauer points out, “The efforts of the federal government, and the fact that several countries now have a hydrogen strategy, shows once more that the energy revolution has become a dominant topic in politics, the economy and science. For this reason, we as scientists view this as a challenge to bring these ideas and plans, which are of fundamental importance for society as a whole, to fruition – and to achieve this swiftly, so that Germany really can play a pioneering role.” 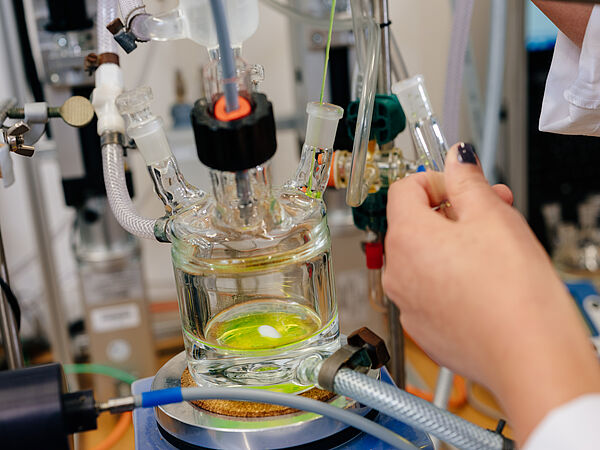 Photo (Paderborn University, Besim Mazhiqi): In a project supported by the Federal Ministry of Education and Research, Professor Matthias Bauer from Paderborn University is researching how hydrogen can be produced by means of sunlight. Download (4 MB)