Moving forward into the next 50 years together: New Year's reception at Paderborn University

Around 400 guests from the worlds of academia, business and politics, together with their family and friends, were invited to Paderborn University’s New Year’s reception on Sunday 15 January. The celebrations provided an opportunity to look back on fifty years of the university’s successful development: ‘This was a half-century during which our university underwent impressive development: into a successful research hub on a national and international scale, an attractive study location with more than seventy courses of study, and a high-performance driver of innovation impacting the city, the region and beyond’, University President Professor Birgitt Riegraf emphasised. The New Year’s reception was also a time to take a look forwards: ‘At fifty years old, Paderborn University is definitely not in its dotage. It is continuing to dynamically develop and is constantly in motion. I am therefore fully confident that our university will also successfully handle the next fifty years.’

With the university’s anniversary, new projects and collaborations, and a return to in-person teaching, the university had plenty of reasons to celebrate and numerous successes to look back on in 2022. At the same time, the past year was not as light-hearted as might have been hoped, due to the war in Ukraine and its impact across the globe. Riegraf noted that staff and students expressed strong solidarity via various aid and donation campaigns. ‘Especially in the crisis-ridden times we are experiencing today, shared experiences are vital to allow us to look to the future with optimism’, the university president explained. ‘These include joint aid measures, working together to find solutions, but also – which links in with our anniversary year – looking back at what we have achieved together and planning other shared projects. With this in mind, the celebrations for Paderborn University’s fiftieth birthday were driven by a sense of community spirit and optimism.’

In her speech, Riegraf particularly emphasised the broad spectrum of pioneering research being conducted at Paderborn University, ranging from artificial intelligence and quantum computing, to sustainability and educational innovation, to the future of mobility. Starting this month, the German Research Foundation (DFG) is funding a new Paderborn Collaborative Research Center (the university’s sixth), called TRR 358 ‘Integral Structures in Geometry and Representation Theory’ and coordinated by Paderborn and Bielefeld Universities. The ‘Jenny Aloni Center for Early-Career Researchers’ was also set up at the university to promote young research talent. Furthermore, since 2022 Paderborn University has been a founding member of the ‘EIN Quantum NRW’ network, bringing together top-level research and development in the field of quantum computing at more than a dozen sites.

‘Exceptional research needs exceptional conditions. In Paderborn, we have both. In recent years, we have been able to establish outstanding research infrastructure in some areas, the expansion of which is now increasingly taking shape’, Riegraf highlighted. In terms of infrastructure, the university has been able to celebrate various major milestones across a wide range of areas: for example, last year saw the go-ahead being given to build the Institute for Photonic Quantum Systems (PhoQS Lab). ‘We therefore have a building project underway that is tailored to the needs of interdisciplinary research and is supporting the research strengths of quantum photonics in Paderborn’, Riegraf outlined. In addition, there was the inauguration of the new high-performance computing centre on campus, housing the ‘Noctua 2’ supercomputer and providing cutting-edge researchers with access to state-of-the-art computing capacity.

‘Digitalisation: a curse or a blessing for education?’

This year’s keynote speaker was Professor Ada Pellert, President of the FernUniversität in Hagen. The economist’s speech examined the impact of digitalisation on education. Pellert emphasised that digital education needs a nationwide and state-wide strategy. She noted that a reflective approach to the topic in the educational sector was vital so as not to endanger social cohesion, and in order to introduce people to the new challenges posed by the labour market and everyday life, taking their life situation and skills into account, and to ease their worries. ‘Digitalisation is changing how, where and with whom we learn. We need to latch on to learners’ reality and look at their life circumstances. Socially acceptable handling of transformation therefore requires a new way of learning that takes individual target groups into account’, Pellert explained.

The ceremony was also used as an opportunity to honour Paderborn scientists and students for their exceptional achievements. The Research Award – the highest endowed award that Paderborn University offers – went to Dr. Adrian Keller of the Faculty of Science for his research into new approaches to combat antibiotic-resistant germs. Dissertation awards, Paderborn University Society awards and a German Academic Exchange Service (DAAD) award for international students were also conferred.

The New Year's reception was compered by Ulrich Lettermann of Paderborn University’s Music department. In addition, he performed ‘Libertango’ by the composer Astor Piazzolla o the soprano saxophone, accompanied by Eckard Wiemann on the piano. Marianne and Eckard Wiemann also delighted guests on the piano with works by Wolfgang Amadeus Mozart and Fanny Hensel. 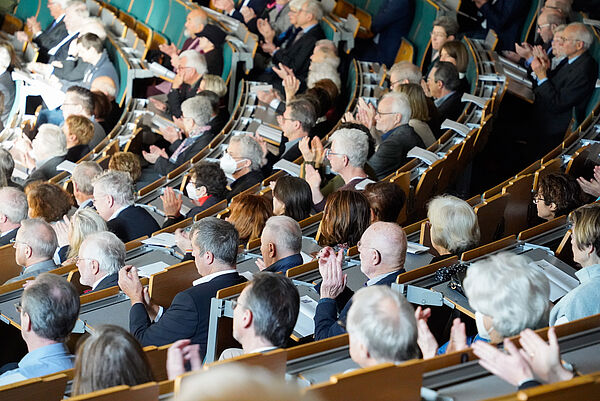 Photo (Paderborn University, Jennifer Bounoua): Around 400 guests from the worlds of academia, business and politics, together with their family and friends, attended the New Year’s reception in the Audimax on Sunday 15 January. Download (3 MB) 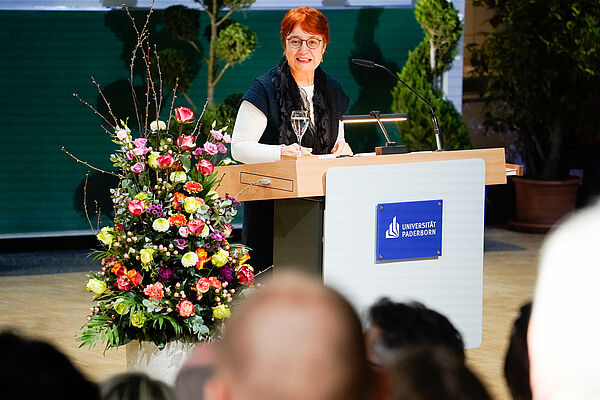 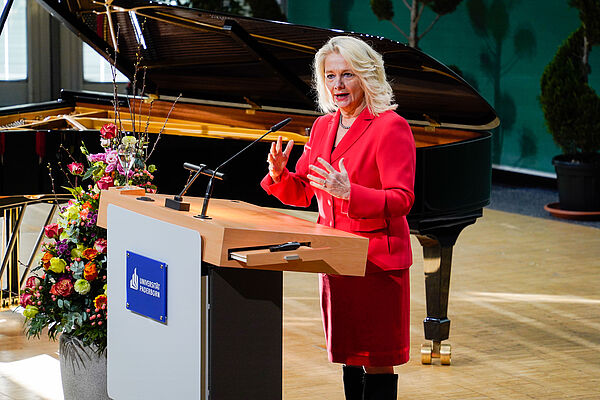 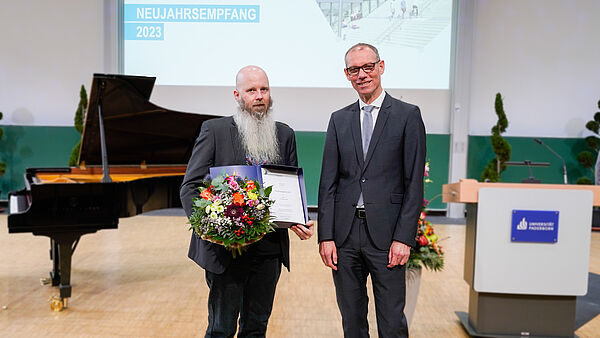 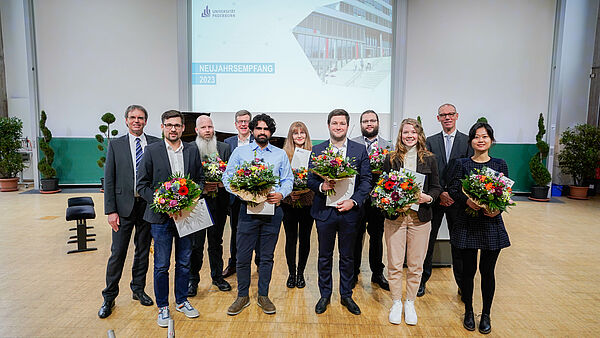 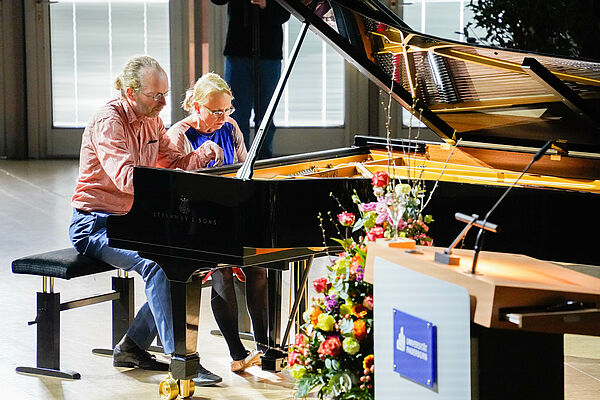