Paderborn University to launch project to promote fitness and sustainability

In mid-October, Paderborn University will be kicking off a special joint initiative: As part of the Campus Forest project, 25,000 trees are to be planted in Haxtergrund country park, in an initiative that will combine fitness, health, conservation and community. The university is running the project in co-operation with the Naturfreunde (Friends of Nature) – Richard Hesse Foundation, German health insurer Techniker Krankenkasse, the Willebadessen community forestry association and the city of Paderborn. The cross-year project will mark both the 25th anniversary of the “Healthy University” working group in 2021 and the 50th anniversary of Paderborn University in 2022.

“One of our goals is to motivate staff and students, as well as friends of the university to exercise regularly, and thereby do something good for their health,” says Sandra Bischof. The Head of Healthy University at Paderborn University is one of the initiators of the project and explains: “We plan to periodically run fitness challenges where participants can collect points, for example in the form of kilometres. These points will then be converted into trees, based on a specific key, which will be planted in the south of the city at the end of each challenge. This will gradually grow into a campus forest, as a satellite location for the university, just a few kilometres from campus.” It is hoped that this tree tribute to the university’s double anniversary will bring joy to many generations to come.

The project organisers are working closely with Nikolas Osburg, Head of the Willebadessen community forestry office, who, along with Paderborn district forester Philip Fortströer, is responsible for the development of the forest in Haxtergrund country park, and Toni Wiethaup from the City of Paderborn Office for Green Spaces and Environmental Protection. Together they have visited potential areas for forestation, which are now being vetted.

The initiative also has the support of the Naturfreunde – Richard Hesse Foundation, which has already successfully initiated reforestation projects in the Paderborn area. “The range of tree species is vital for sustainability,” says Richard Hesse. “To create a mixed forest for the future, you need at least seven different species of tree. We’ve gone for Douglas firs, oaks, beeches, larches and redwoods, for example.”

Dennis Kehne, who works in the University Sports department and is responsible for student health management at Paderborn University, joined forces with the project team to devise the first fitness challenge: “For 25 days from 11 October, staff, students and friends of the university will be able to collect kilometres. Whether running, walking, cycling, swimming or skating – almost any form of physical exercise will count. Participants will then enter the kilometres they’ve covered in the Teamfit app.” The more kilometres they record, the more trees will be planted in the campus forest.

Christina Mensch, Sustainability Officer on the German General Students’ Committee (AStA) at Paderborn University, is expecting large numbers to take part in the challenge: “Haxtergrund is very popular with students and the project puts the forest within reach.” Hans-Norbert Blome from Techniker Krankenkasse hopes that participants will spur each other on during the challenges: “It’s not supposed to be a competition, but a little healthy competition for a good cause is definitely a good thing.”

All details about the project can be found at: www.upb.de/universitaet/gesunde-hochschule/campuswald 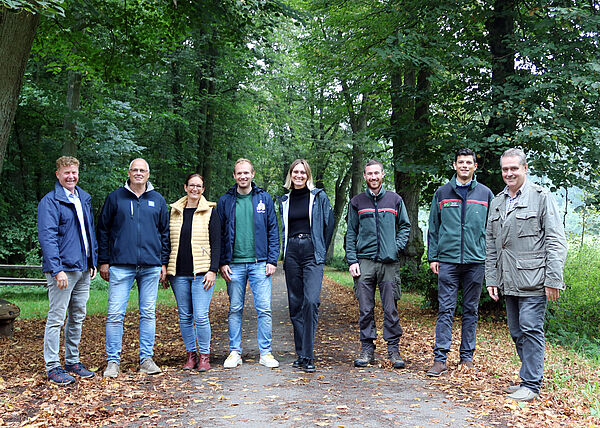