Wearables – miniature computers worn on the body to measure specific body functions – have been part of our daily lives for quite some time now. In competitive sports, they have long been part of the standard equipment. The devices produce vast quantities of data and provide insight into fitness and physical strain. In professional sports, artificial intelligence (AI) offers additional benefits – though until now, its use and consistent analysis of the data have not been widespread. Scientists from Paderborn University, in a research project with professional handball club SG Flensburg-Handewitt, have now studied how the use of algorithms can minimize the risk of injury and improve athlete performance. The researchers also developed an AI feature that can predict goals.

Data is recorded, but rarely analysed

“Normally, artificial intelligence is used to identify injury risks or to develop key indicators that have to do with professional athletes’ performance. FC Liverpool and FC Barcelona are two heavyweights of the international sports scene that are already exploring the possibilities of data analysis using AI. For two years now, the national handball league has been systematically recording data – but we are still far from putting it to regular use,” says Professor Jochen Baumeister, Head of the Exercise Science and Neuroscience working group at Paderborn University.

A win-win situation for sports and science

SG Flensburg-Handewitt plays a leading role in European handball. Trainer Michael Döring explains, “Motion data is becoming more and more important in our day-to-day training plans. But we want to take it a step further, so we are already working on the future of data use in the professional sports world. Together with the researchers at Paderborn University, we want to make individual player performance quantifiable.” Using AI creates a wide range of previously unanticipated opportunities. Baumeister calls it a win-win situation for the sport as well as for scientists: “We have been working closely with SG Flensburg-Handewitt for years – and now, thanks to my Paderborn colleague Professor Oliver Müller in the field of economic science, we have the right tools to make our data analysis future-oriented and innovative. That means science and sports benefit equally.” Müller is Head Professor of Management Information Systems and Data Analytics at Paderborn University. Among other things, he studies how people can make better decisions by using algorithms.

In the project, sensors record the location of the players and the ball every fifty milliseconds. But the really exciting thing is the AI that the Paderborn scientists have developed. The technology, “PIVOT,” can independently identify movement patterns in the measurements, and uses the data to predict how likely it is that a goal will happen within the next few seconds. Müller: “PIVOT makes it possible to calculate the likelihood of a goal by either team in real time. If you compare this likelihood before and after a specific play, you can measure how good – or bad – the play was, along with the related decisions made by the players.” Baumeister adds, “Quantifying performance is a good basis for studying connections – for instance with the nervous system. It gives us valuable insight into the condition and activity of the players.” For SG trainer Maik Machulla, the findings could provide good support for everyday training and matches. “The innovative data handling opens up new possibilities for us. Thanks to the long, extensive collaboration with Paderborn University, this will allow us to become a pioneer in the BHL and in European handball,” said Machulla.

So far, the team of researchers has analysed the actions of players in possession of the ball. According to Baumeister, expanding that to include players who do not have the ball could offer further insights. For each scenario, they could then also calculate the difference between the predicted best possible action and the action that actually took place. 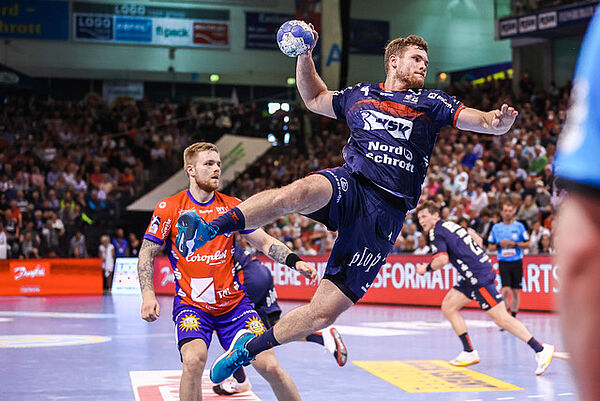