2020: Local elections in NRW and election of the Integration Council 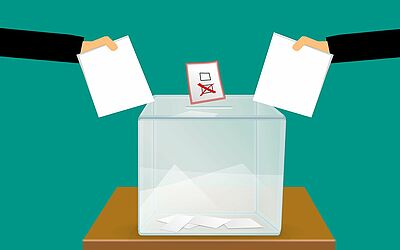 You may have seen some election posters that were recently put up in Paderborn or you may have received a notification letter. On 13 September 2020, local elections as well as the election of the Integration Council will be held in the federal state of North Rhine-Westphalia. Whereas Germans and citizens from the EU are eligible to vote in the local elections, only people with a foreign nationality (not German) or people with a migration background are eligible to elect Paderborn’s Integration Council.

During the local elections (“Kommunalwahl”), the members of the town council (“Stadtrat”), the district council (“Kreistag”), the mayor (“Bürgermeister*in”) as well as the disctrict administrator (“Landrat/Landrätin”) will be elected.

You can vote, if you

If this applies to you, you will receive an election notification by post from the municipal administration approximately four weeks before the election.

On the notification, you can find the address and the opening hours of the polling station.

How can I vote?

Further information can be found here (in German).

Election of the Integration Council

On 13 September 2020, Paderborn’s Integration Council will be elected.

The Integration Council of the City of Paderborn consists of 22 members, 15 of whom are directly elected by the eligible voters for the duration of the city council's term of office. Each person entitled to vote has one vote with which he/she can either elect an individual candidate or a group (list proposals). The remaining 7 members of the Integration Council are elected from among the members of the City Council of Paderborn.

The integration Council represents the interests of immigrants in Paderborn and gives advice to politicians.

You can vote, if you

If you are eligible to vote, you will receive a notification. On the notification, you can find the address and the opening hours of the polling station.

How can I vote?

Further information can be found here (in German only).