Target agreements to increase the proportion of women in science

Since 2014, Paderborn University's Executive Board has been concluding target agreements on equal opportunities with all five faculties. The target agreements are intended to serve both as an incentive system to increase the proportion of women and as a quality assurance system.

The target agreements include the increase in the proportion of women, especially in filling professorships and in the area of junior academics. The targeted rate of increase is to be based on the cascade model in accordance with the German Research Foundation and includes comparative figures for the state and federal states.

As an incentive system, the Presidential Board will make financial resources available to the faculties if targets are achieved. In addition, the faculties' equal opportunity goals will continue to be supported by flanking central measures such as mentoring programmes, start-up funding for doctoral studies, scholarships for young female academics and childcare facilities.

View the press release on the first "Target Agreements to Increase the Proportion of Women in Science" (only available in German). 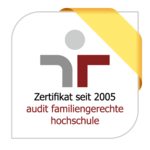