As a postdoc, you belong to a group of experienced scientists or academics who make an important contribution to research and teaching at Paderborn University and who are at the same time able to further qualify themselves for the appointment as a professor. Within the scope of your activities as a postdoc, you will sharpen your own scientific or academic profile, obtain important scientific, academic and interdisciplinary competencies and build up your own network at a national and international basis.

Apart from the primary objective of scientific and academic qualification, the postdoc period should also be used as orientation phase with regard to your own career goals as well as for obtaining interdisciplinary competencies: 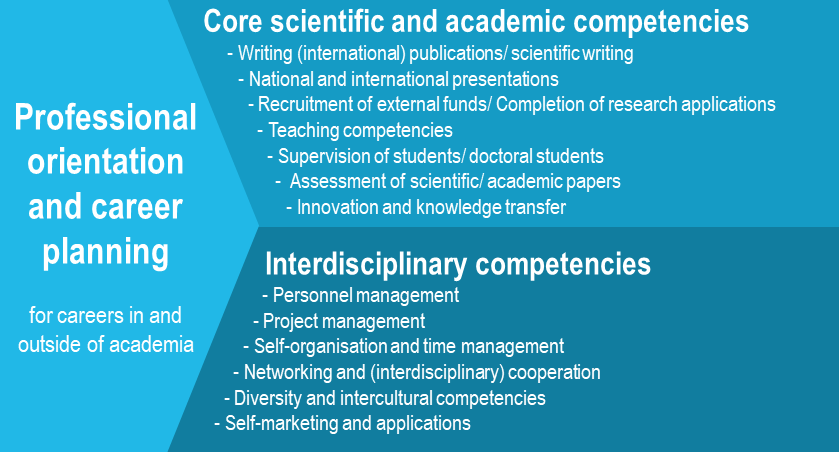 Each of the different phases of the postdoc period (orientation phase, specialisation phase, appointment phase) focuses on different qualification objectives (more information on this is available under Career paths).

The financing of this phase can be ensured via an employment at the university or external financing and scholarship programmes.

Framework conditions for employment relationships in the postdoc period

The group of postdocs includes all scientific/academic staff with a completed doctoral degree and employed on a fixed-term basis. Postdocs are employed in qualification positions (goal: habilitation or equivalent) or in project positions within the scope of an externally funded fixed-term project.

The group of postdocs includes both the postdocs in the early phase (approx. 0-2 years after their doctorate) as well as in the advanced phase (approx. 2-6 years after their doctorate). The qualification objectives, too, are heterogeneous: Apart from the traditional habilitation, it is also possible to obtain habilitation-equivalent qualifications (see Career paths).

The group of postdocs is made up of salaried employees as well as of fixed-term civil servants. In accordance with the Agreement on Good Employment Conditions, the initial contract period should cover at least three years, generally on a 100% full-time basis, if the postdocs strive to qualify for a professorship. Apart from the own scientific qualifications, the scope of work also includes supporting the relevant workgroup in the processing of research topics, participation in project organisation & application as well as an active involvement in teaching (generally 2 semester periods per week). Compared to doctoral students, generally a higher degree of independent work is required here, which should ideally increase during the course of the postdoc period. And also an active involvement in the supervision of theses (BA/MA) including a proposed assessment is required, as the right to assess can be granted on application.

The general conditions for fixed-term employment relationships for scientific and academic qualification are set out in the Academic Fixed-Term Employment Regulation or the Regulations for Civil Servants in NRW.

On the following pages, you will find more information for junior research group leaders, junior professors and tenure track professors.

For more information on the qualification opportunities and advice services go to the section promotion of junior academics.

For information on postdoc scholarships for junior scientists/academics go to the pages of the Research Committee. For information on additional financing options, research grants and science and teaching awards click here.